Current destination: Some small town outside of Laramie, Wyoming

Estes Park, Colorado is probably my favorite place in the entire world. Now, I can’t say for sure because I haven’t seen the entire world, but of the places I’ve been, it’s currently ranked number one. We love it there so much that we dipped south when we might not have needed to in order to spend time there before heading onward to Indiana. Besides the totally shite first day there (shite because Casey was sick and barely able to function, not because of the delicious beer), we had the best time. We rode through Rocky Mountain National Park, visited the hotel that inspired “The Shining”, got stalked by some hungry raccoons at dinner in town, and rocked out to the Mountain Boys Band in the lodge at Elk Meadows. 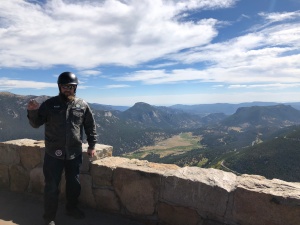 On Thursday, Dave and I decided to take the kids hiking around Bear Lake, where we saw elk up scarily close (scary because what if they decide you pissed them off and charge?). 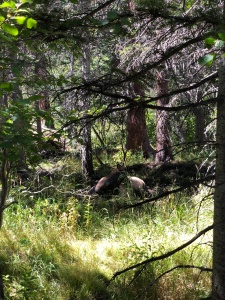 The half-mile venture went so well that we felt confident enough to trek another mile to see Alberta Falls. The hike there went relatively well, though when we passed the sign that warned we still had .6 miles left and Zoey had already begun whining about how hungry she was, Dave and I gave each other nervous smiles, but kept moving forward. The hike there was worth it, but we almost didn’t make it back. 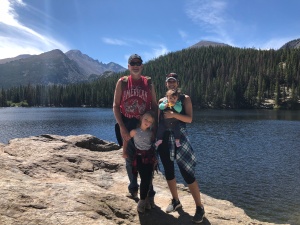 Two minutes into our journey back, Zoey declared she was too tired to keep going.

Then she started to whine in earnest: “I can’t do it!” We would insist she could and encourage her to keep going. She would collapse dramatically, legs buckling beneath her, face crumpling in anguish. “Come on, Zoey! You’re so strong! You’re the strongest! You CAN do it!” We would say. She’d move another 30 feet and start the process again. I was wearing Charley, Dave was wearing the backpack, and we were moving uphill – I had no idea what I was going to do if she decided she couldn’t make it. Fortunately, this lovely couple from Iowa who clearly understand children, challenged her to a race, playing on the Underwoods’ deep-rooted desire to win, we made it back, and victory was ours!

This week we’re spending some time in the Black Hills of South Dakota and then parking our trailer while we’re in Houston for three weeks (YAYAYAYAYAYAYAY!).