Next stop: Another Place in Colorado

We left Fort Worth on Sunday and made it to Colorado yesterday afternoon on our first real trip. I emphasize “real” because our first trip was a family reunion of sorts, so we’re not sure it counts (though we did drive over 10 hours with two kids…). This time, however, it’s just us and the open road. Originally we’d planned to take it easy and only drive a few hours a day and instead, yesterday we nearly murdered ourselves (and each other) and spent 7+ hours traveling each day to make it to a friend’s house here in our favorite state in less than two days.

On day one, we stopped overnight in Amarillo and stayed at a nice little RV park off of 335, right next to this crazy cool place called Big Texan. If you haven’t been there, I highly recommend it. The food is pretty good, but the place really crushes it in terms of ambience. There are games for all ages, an incredible outdoor waiting area with live music, and best of all they have lots of delicious in-house brewed beer. 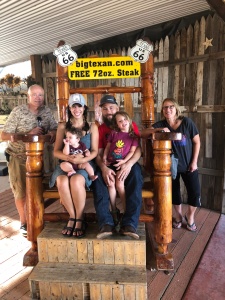 <This would be a good place to stop reading if you’re only interested in shiny travel things because next up is some cancer chat.>

So far, things have been pretty quiet and we’ve only hit a few minor snags. One of the more difficult things to manage (other than traveling with kids and we all expected that to come with a few trials and tribulations) is working around Casey. Y’all. I know you know it, but cancer really, really effing sucks, especially when he feels poorly. And he feels poorly a lot.

Mornings are hard because after going the night without eating, he’s already sick, then he has to take his chemo pill. Now. Don’t get me wrong. We’re super glad it’s working, but holy hell, Batman! It would be great if it didn’t make him feel like s-h-i-EEEET since he has to take it every day until forever (or until it stops working). For hours afterwards, he feels nauseous and out of sorts, and doing anything strenuous, anything that gets him even slightly overheated makes it exponentially worse. Then, the fact that he isn’t able to do things he wants to do/used to do easily makes him angry and [insert all the negatively connotative emotions you can think of here]. On especially bad days, the days I’m more tired or stressed than usual, I get all emotional and then we’re just a bag of poorly functioning emotions who can barely pull ourselves together. Those are the days when Zoey says things like, “Guys, you have to be nice to each other. Say sorry to mom, dad. Say sorry to dad, mom.” We do so, however begrudgingly, because who could say no to such a darling little monster?

Sometimes, because he looks perfectly fine, it’s easy to forget he’s sick and I get angry or resentful or whatever icky feeling it is that I can’t decipher at the time, because of a bunch of selfish reasons – I’m tired because I got up 37 times with the kids the night before or I had to clean the house by myself or I had to make dinner while I had a massive headache or any other stupid reason. Then I beat myself up when I hear him vomiting violently or I see the dark smudges indicative of a truly poor sleep beneath his eyes or I watch him struggle to get things done while he feels decent enough to do them. It’s a vicious circle of he feels sick and I feel stressed, he feels guilty and I feel sad, and yada yada yada feelings and stuff.

I don’t say all of this to be a downer or to make people feel sorry for us. I say them because they’re the reality of cancer in the darker moments. In the lighter moments, we get news that tumors are shrinking, we get to take trips across the country and spend time together as a family, we get to sit on the couch and watch Netflix together, we get to dance with our kids, we get to ride the motorcycle in the mountains. The light moments outweigh the dark significantly, but when those bad ones hit, it’s all too easy to fall into the pit and dwell there indefinitely, wallowing in the woe is me.

I could have even done that as I wrote this while Casey napped on the couch behind me. I could have lost myself in the why us? and the I’m so tired of being sick and tired, but when he wakes up, the grandparents are watching the kids and we’re going to ride off into the sunset together. Until bedtime anyway because kids and responsibilities and whatnot.